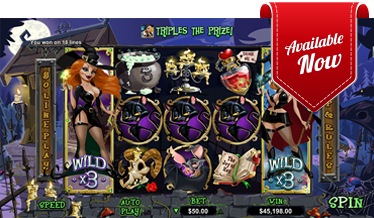 The anticipated sequel to the hugely popular Bubble Bubble from Real Time Gaming is coming to Golden Euro Casino on October 11th! Winni the Witch is back and got some help from her cheeky sister Wanda. Bubble Bubble 2 ups the ante with three giant features, triggered by selecting one of three scattered wands when they appear.

The enthralling feature is topped off with the addition of the patented ‘Win-Win’ add-on, which awards players a bonus prize in the event of a low feature win. Isn’t that just wicked?

Bubble Bubble 2 will be available on Download, Mobile Casino and Instant Play!

Fall under the spell of Bubble Bubble 2 and experience for yourself why this series has players enchanted!​