The best slot games this Halloween!

The games at Golden Euro provide a variety of styles and content. Today we would like to present the most popular Halloween-themed slot machines. There are vampires, witches and other scary characters, but they all have one goal: to cater to your wins! 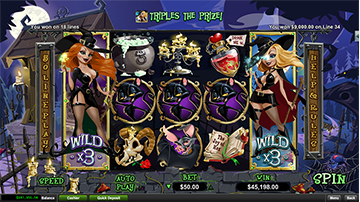 The most beloved slot at Golden Euro is Bubble Bubble, where scattered cauldrons trigger one of three huge features. Wild Ghosts invade the reels and Winni the Wild Witch may use her magic to turn reels wild. You can win up to 20 Free Games with even an expanded Wild held over the middle reel for all spins! The amazing news is that this game now has a sequel, where Winni the Witch stirs up some magical wins with the help from her cheeky sister Wanda.  Bubble Bubble 2 ups the ante with three giant features, triggered by selecting one of three scattered wands when they appear.

But Golden Euro has yet another witch walking abroad. With a dash of good fortune and a pinch of luck, Witch's Brew has got the recipe for a magical game! The Witch and Dragon Fang are Wild symbols that appear on reels 2, 3 and 4. A bewitching re-spin feature is triggered when 3 of the same Wild symbol appear. These reels are held in place while the other reels re-spin up to 10 times! Up to a huge 125 free games are awarded when 3, 4 or 5 scattered Goblin Blood symbols appear, with Wilds appearing grouped on their reels during free games, and all prizes are doubled. 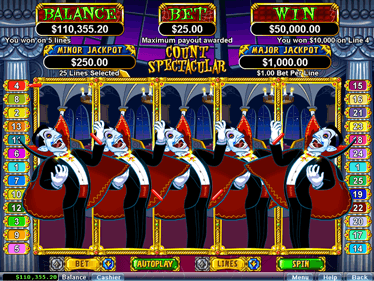 If you are more into vampires, you can have a spookily good time with Count Spectacular. He is Wild on all reels for all symbols, including scatters, and he will expand to cover all positions on the reel whenever he appears. The feature is triggered when the Count appears on both Reels 1 and 5. You can then choose to play either 12 Free Games with triple prizes, or 4 Re-spins. The Count on Reels 1 and 5 is held if re-spins are selected, while the other reels spin 4 times. It won’t be long before you’re mesmerized by Count Spectacular!

And last but not least, brave the darkness and try Voodoo Magic, the bewitching 13-line slot game at Golden Euro Casino. With stunning artwork and eerie atmospheric effects, Voodoo Magic features spooky Wild Priestesses and scattered Voodoo Dolls. You can win up to 25 Free Spins with any scatter win and there is the chance of a Magic Multiplier being awarded at the start of the feature.

All these games are available in Instant Play, Mobile Casino and in the Download Version and some of them are featured in this month’s free spins bonuses. Look out for special offers this Halloween!