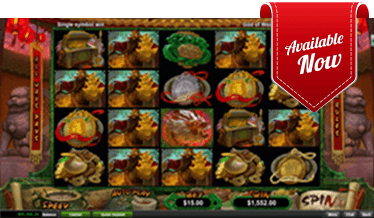 The ancient treasure dragon of Chinese mythology, Fucanglong is the center of the stunning new All Ways Pays slot game, available from January 11th at Golden Euros Casino! Have an exclusive sneak peak on its look and feel and get details on all the awesome features, such as its 1024 winning combinations or the multiple free game features!

This game is full of fiery mountains, pearls and wild creatures and the fierce treasure dragon Fucanglong, who is waiting to bring you good fortune! There are several free game features, one of them can be triggered by Scattered Dragon Mountains, with frequent retriggers adding more games and increasing the prize multiplier up to eight times. Scattered Dragon Pearls trigger another free game feature with a Pearl hiding a win value that is revealed after 8 free games have finished. If the win from the free games has not reached the Pearl number then the Fucanglong Feature is triggered and extra free games are played until the total feature win reaches the Pearl value, which on top of that increases on each extra game, allowing for a truly Fucanglong feature, where the Wild Dragons expand to cover their reel!

Fucanglong will be available on Download, Mobile and Instant Play starting January 11th!