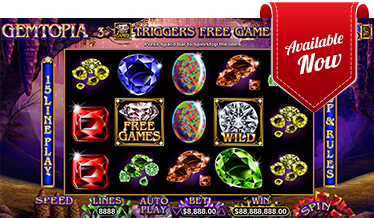 Not long after the launch of Kung Fu Rooster, August brings yet another new game to Golden Euro Casino. The spectacular new slot Gemtopia includes 2 glittering features and will be available from August 21st.

The second feature is a Free Games with Bonus Picks Feature. During 15 Free Games, extra “Bonus” gems are added to the reels, with 3 or more awarding extra free games and an instant prize of up to 1000x bet per Bonus Gem!

Gemtopia will be available on Download, Mobile Casino and Instant Play!