Have some fun this holiday season with elves, reindeers, plus huge features and prizes on offer in our holiday-themed slot machines. We tell you which games have been most popular, which ones are hot at the moment and offer you a bunch of exciting promotions this December to make sure you get to Christmas safely. 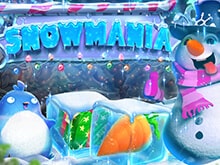 The most popular Holiday game at Golden Euro last year has been the latest release Snowmania. Chill out with a fresh and frosty slot, where any winning symbols are crushed after pays are awarded! New symbols then appear and may award extra wins! A prize-multiplier builds up for successive wins from the same original spin, with prizes x2 after the first crush, x3 after the second crush and x5 thereafter. Three or more presents appearing left to right on a line triggers 10 free games. Prizes during free games use boosted crush-multipliers, up to a cool x15!

We are curious to see if this year's release Swindle All The Way will be as successful!

The bright and festive slot Santastic! takes the traditional 3-reeler and adds in a bonus prize meter twist, which is activated any time a 3-of-a-kind symbol lands on a played line. 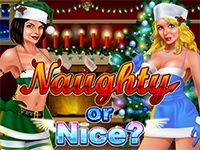 Win a range of free spins, bonus prizes or Jackpot spins for a chance to hit the big one! With gently falling snow & colourful lights, Santastic! is the ideal game to sit back and enjoy as the jolly holiday excitement begins!

Within the series of Naughty or Nice games, the original is still our players’ favorite. Santa’s hot and sexy helpers are trying to help you figure out if you have been naughty or nice in the past year: When 3 or more scattered "Naughty or Nice" wreaths appear anywhere, you'll be confronted with the decision to choose between naughty or nice and you will receive 10 free games. Prizes are doubled if one or more of the sexy girls appear in a winning combination. Each girl, whether naughty or nice, appearing during free games will award a bonus.

For those of you who like Christmas a bit different, the sequel Naughty or Nice Springbreak is the right choice. It gives you the option of placing a side bet which will guarantee a feature can be triggered in as little as 26 spins! Put aside your winter blues, unleash your inner party animal and join the girls down at the beach today! 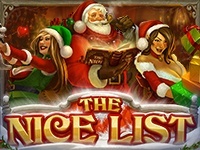 Once you have figured out if you’ve been Naughty or Nice, we can get you on Santa’s list: another holiday-themed game The Naughty List, lets you pick from a stash of glittering presents and win free spins and instant prizes of up to 600x your bet! The Lucky Feature may also instantly trigger the Santastic free spins feature after any normal spin.

But who says naughty girls have all the fun? The Nice List, the successor to the popular holiday slot The Naughty List, has become wildly popular at Golden Euro Casino and players apparently prefer to see their name on the Nice List. Three Scatters trigger one of two features, including the festive Present Pick Feature which can award huge multipliers and extra wilds! A random Lucky Feature may also trigger at the end of any normal game, awarding up to 10 free spins with up to a 10x multiplier! 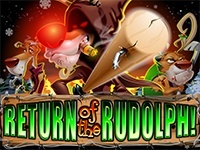 The hottest games at Golden Euro at the moment are the Rudolph-themed slots. Return of the Rudolph, the third game in the Rudolph vs. Santa series, contains features from the previous two games Rudolph’s Revenge and Santa Strikes Back, plus a new bonus round feature. When three Rudolphs appear on Reel 3, he will expand and triple all prizes if substituting in a winning combination. Spinning up 3 or 4 Thugs symbols will trigger the Rudolph's Revenge Feature, the Santa Strikes Back Feature or the Rudolph's Rampage Bonus Screen Feature. Help Santa rescue his elves and be rewarded with free games and an array of potential extras, including quadrupled prizes, expanding tripling Wilds on Reel 3 and extra Wilds! Players lucky enough to spin up 5 scattered Thugs will be awarded with the Progressive Jackpot.

However, our insider-tips this holiday season are the less played, but hot games Naughty or Nice Springbreak and The Elf Wars - both of which are available on Download and Instant Play. 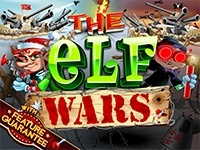 The Elf Wars sees the action intensifying, as the elf factions splinter off to ally with Santa and his North-Pole guardians, or join the rebellious Rudolph and his thugs who are determined to seize control of the lucrative present-trade. A re-spin gives the chance to trigger 1 of 4 main features, building on the impressive feature-set found in Rudolph’s Revenge, Santa Strikes Back and Return of the Rudolph. The Elf Wars also adds a new ‘Jackpot Spins’ feature, which can award instant prizes, the ‘Santa Strikes Back’ free games, or a huge Progressive Jackpot. The Elf Wars also uses the patented Feature Guarantee system, ensuring that a feature will be triggered within 150 spins!

This December try a different game every day!

Starting on December 1st, the Golden Euro Advent Calendar offers a Free Spin bonus every day up to Christmas Day! Every day a new bonus will be revealed in our Golden Euro Advent Calendar or simply log into your casino account and check the message center or the cashier on a daily basis to make sure you don't miss out on any of our exciting games.

It's simple: No playthrough, keep €1 per bonus and collect up to €25 from the Advent Calendar Campaign!