Run across a lush jungle in the Amazon rainforest and unlock it secrets in the Secret Symbol slot. Available for free and real money in Golden Euro casino, the slot comes with 25 paylines and a progressive jackpot in an Aztec jungle setting.

The Secret Symbol slot offers a secret path to huge wins with a bit of luck. The Aztec symbols and setting give it a distinct look and feel, while the gameplay features are more than enough to satisfy the tastes of all types of players.

Of course, the progressive jackpot is the shiny metal atop the Aztec step pyramid that you can win randomly on each spin. 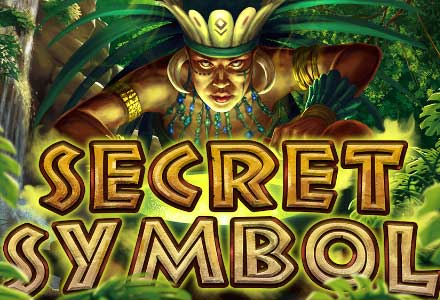 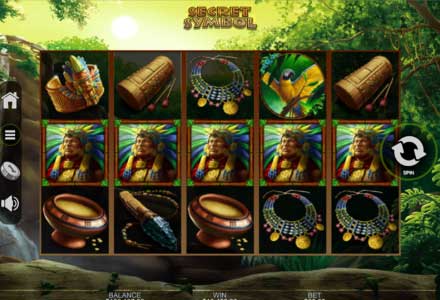 Nothing is very unusual when it comes to the Secret Symbol slot setup. It’s a 5x3 game with 25 fixed paylines with reels populated by jungle beasts and secret Aztec symbols. You’ll find jungle beasts such as a snake, jaguar, and a colourful non-beastly parrot, while also getting a glimpse of an Aztec chief and paraphernalia.

All the controls are right beneath the reels, so you shouldn’t have trouble spinning the slot’s reels. We have to say that the graphics and audio effects are nothing short of impressive, especially the animated lush jungle background with the waterfall on the left.

To play the Secret Symbol slot, you will need to place a bet first. The lowest you can go is €0.25, while the highest is €125 per spin. Hit the Spin button when ready or use the Autoplay feature to let the reels roll automatically.

The Aztec Chief wild pays the most during the base game and substitutes other symbols except for the pyramid scatter. The pyramid itself triggers the free spins round and pays in any direction.

The free games round is the main feature in the Secret Symbol slot. It is triggered by 3 or more scatters which will give you 10 free spins. If you’re lucky enough to land the Aztec Chief on reels 2 or 4, he’ll expand to cover them full.

After each free spin, a secret symbol multiplier is revealed. It ranges between x2 and x20, so it can nicely spice up your wins.
As mentioned earlier, there’s a progressive jackpot on top of all wins that can be won randomly. You can hit it with a bit of luck on any spin in the base game or free spins round and win bigger reward than what the slot offers in the base game or free games round.

What Makes the Secret Symbol Slot So Special?

The Secret Symbol slot is a magical journey through forgotten Aztec jungles. It’s a slot with a pretty straightforward gameplay that makes it a perfect choice for new players.
Seasoned spinners will like the setting and the fact that there’s a progressive jackpot included in the mix. With regular wins up to 50,000x your stake, it’s definitely worth exploring the ancient jungle for the secret symbol.

If you are really into the jungle feeling, you might also enjoy one of our latest games Thai Emerald.