In ancient Greek mythology, Chrysus or Khrysos is a minor god and personification of gold. It has been used as the basis for the newest slot in Golden Euro casino, Khrysos Gold, which offers several fun and rewarding features that can take your wins up to 50,000x the bet.

Khrysos Gold is a 5x3 slot that will certainly draw visual comparisons to Divine Fortune. It is obviously set in ancient Greece, with marble columns holding the reels populated by Greek alphabet letters and warriors. The slot’s main highlights are the Slippery and Morphing wilds, two great features that can put you on the path to ancient riches. 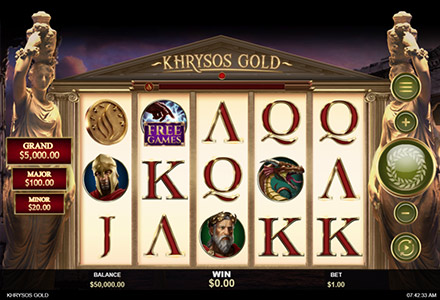 You can see how it works and practice playing the Khrysos Gold slot in Golden Euro casino or play for cash to win real money returns.

As mentioned earlier, Khrysos Gold looks a bit like NetEnt’s legendary jackpot slot Divine Fortune. That’s just in aesthetics, so it’s not a replica of the slot at all. Imitation is the highest form of flattery, so no one should mind where Khrysos Gold got the aesthetics idea.

The 5x3 reels are populated by Greek warriors, mythical creatures such as the Hydra, Khrysos himself, and two types of wilds. Jackpot symbols are on the reels too – three of these together with a Slippery Wild can help you win one of the three jackpots.

With medium volatility and 20 fixed paylines, this is a slot that can deliver solid wins frequently if you are one of our luckiest players.

Two Types of Wilds and Jackpots for Wilder Fun than Ever

We’re used to ancient Greek mythology slots to have a bit of traditional gameplay, but Khrysos Gold breaks that mould. Sure, the gameplay is basic in the base game, but the two wilds add flair to it. Both substitute symbols in winning combinations, but one of them also triggers the two wild features.

Those are the slot’s highlights – the Slippery Wild and Morphing Wild. The former is triggered whenever a wild lands on the reels. It will then expand to cover a position below, then move one position down per spin. Additional wilds may appear on the reels during the feature, morphing into Slippery wilds as well.

When it comes to the Morphing wild, it’s a fancy name for a wild transformation feature. For this feature to occur, a wild needs to land behind a Slippery wild during the feature. Once it turns to a Morphing wild, it will morph the entire reel to wilds before awarding pays.

Three jackpots are in Khrysos Gold, and they can be won by three or more bonus symbols collected in the base game and a Slippery wild. This triggers a Hold & Win respins feature that can award the Minor, Major, or Mega jackpot.

The feature list finally ends with the free spins round triggered by three scatters. All the other features are active during this bonus round, including the jackpot mini-game.

Khrysos Gold is one of our most exciting recent slots at Golden Euro casino with a host of fun features. The two wild features are its main highlights, but you can also enjoy a free spins round and a jackpot mini-game. With wins up to 50,000x the bet, it truly offers a bag full of ancient coins without digging them out.